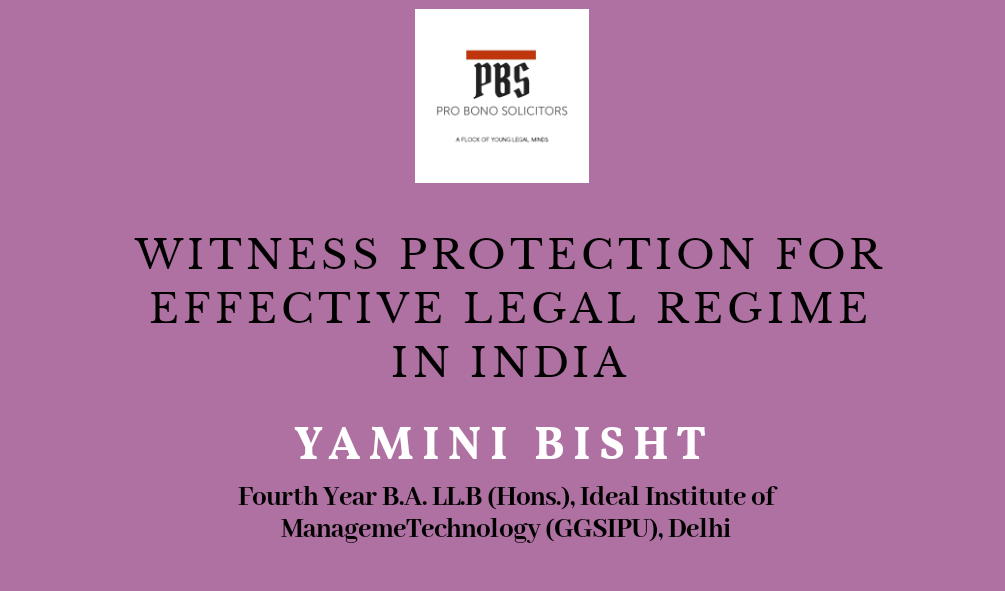 This article is written by Yamini Bisht, a Fourth Year BA. LL.B. (Hons.) Student at Ideal Institute of Management and Technology (GGSIPU), Delhi.

The Criminal Justice System protects certain fundamental rights and liberties of the people guaranteed under the Constitution by enforcing law and punishing the offender. The judicial framework followed in India for dispensation of criminal justice is the adversarial system of common law adopted from the British Judicial System. The Adversarial System clearly focuses on the role of witness in criminal cases. The author aims to discuss the position of ‘witness’ as the foundational basis of justice and equity rests. The author also throws light on the pathetic condition of witnesses in India as he faces wrath, pressure and threat to his life and existence from the accused. Lastly the article enumerated the necessity for witness protection as a prerequisite for an efficient judicial system in a country which in turn is required for sustenance and proper functioning of a state governed by rule of law.

Criminal Justice System protects certain fundamental rights and liberties of the people guaranteed under the Constitution by enforcing law and punishing the offender. In compatibility of this goal, the functionaries of the criminal justice framework pursue the principal “Ensure the Good and Punish the Wicked.” Succinctly, the criminal equity organization endeavors to diminish criminal conduct. The criminal justice system deals with the process of defining crime, prevention and detection of crime, process of determination of guilt and quantum of punishment and the rehabilitation of citizens punished for crimes, so that they may once again become useful members of the society.

The judicial framework followed in India for dispensation of criminal justice is the adversarial system of common law adopted from the British Judicial System. The Adversarial System clearly focuses on the role of witness in criminal cases. Witness is the foundation on which the structure of justice and equity rests.

The term “witness” refers to an individual who is familiar with the certainties and conditions, or is in control of any data or has learning, important with the end goal of examination, inquiry or trial of any crime including serious offense, and who is or might be required to give data or create an impression or produce any record during investigation, inquiry or trial of such case.

The High Court of Delhi in the case of Ms. Neelam Katara v. Union of India[1] defined witness in the following words: “Witness means a person whose statement has been recorded by the Investigating Officer under section 161 of the Cr.P.C. 1973”.

The Supreme Court in State of Gujarat v. Anirudh Singh,[2] held that “It is the duty of each and every witness to assist the State in giving evidence.”

Present Scenario of Witness in India

The phenomenon of witness turning hostile has now turned into a reason for grave worry for the judiciary in India. There are many incidences where the witnesses have given their testimony which is deliberately ambiguous and hence would be of no help in determining the guilt of the accused.

The Supreme Court of India also expressed deep concern about the plight of witnesses in Swaran Singh v. State of Punjab[3]. It was held that a witness comes to the court at his own cost. But still the witness is not treated with respect and is usually misbehaved with. He isn’t even offered a glass of water.

In Zahira Habibullah Sheikh v. State of Gujarat[4] Supreme Court expressed that the witnesses were pressured by the accused to go back on their earlier statements and the trial was totally vitiated.

Protection of witness is a prerequisite for an efficient judicial system in a country which in turn is required for sustenance and proper functioning of a state governed by rule of law.

In a society, administered by a Rule of Law, it is imperative to ensure that investigation, prosecution and trial of criminal offences isn’t preferential in light of dangers or terrorizing to witnesses. The need to protect witnesses has been emphasized by the Hon’ble Supreme Court of India in “Zahira Habibulla H. sheikh and Another v. State of Gujarat[5]”. While defining Fair Trial, the Hon’ble Supreme Court observed that “If the witnesses get threatened or are forced to give false evidence that also would not result in fair trial”.

At present there is no law/scheme holistically at the National level for protection of witnesses. Keeping in view the Hon’ble Supreme Court has approved India’s First Witness Protection Scheme drafted by the union government. The Apex Court in the case of Mahendra Chawla & Ors. Vs. Union of India & Ors.[6] approved the Witness Protection Scheme, 2018 and has asked the Centre, states and Union Territories to enforce it in letter and spirit.

The role of witnesses in India throughout different time allotments has recaptured its significance and certainty in the criminal trials. In the current scenario, however, respect and dignity is lost in the process of the trials. Hence the Indian Legal system needs to reinstate that respect and dignity to the witnesses to ensure fair trials and victims being brought to justice in true sense.[8]

In recent year’s extremism, terrorism and organized crimes have grown and are becoming stronger and more diverse. In the investigation becoming and prosecution of such crimes, it is essential that witnesses have trust in the criminal justice system. Witness protection programs and witness protection laws are just the need of great importance. Truth be told, it is the nonappearance of these laws that has helped in further reinforcing the criminals and offenders.

Witnesses need to have the confidence to come forward to assist law enforcement and prosecuting agencies .They should be guaranteed that they will get protection and security from intimidation and the harm that criminal groups might seek to inflict upon them in order to discourage them from cooperating with the law enforcement agencies and deposing before the court of law. Hence, it is high time that a scheme is put in place for addressing the issues of witness protection uniformly in the country

The scheme is the first attempt at the national-level to holistically provide for the protection of the witnesses, which will go a long way in eliminating secondary victimization. The scheme strengthens the criminal justice system in the country and will consequently enhance national security scenario.[9] Hence, the proper implementation should be made to ensure the principles of Natural Justice and Rule of Law as conceived by our constitution, is maintained in its actual soul.