A Flock of Legal Minds 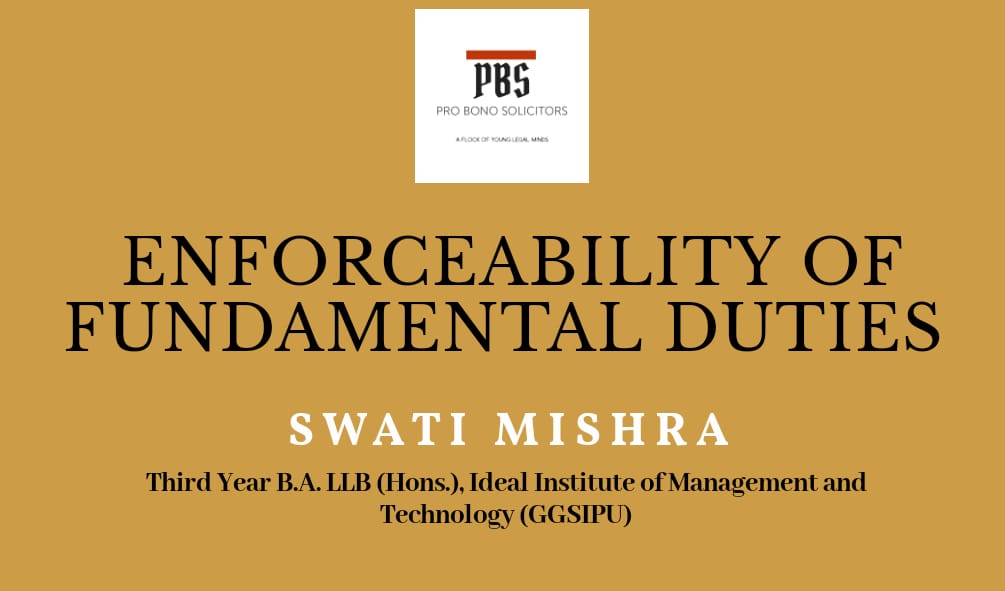 The true source of right is duty. If we all discharge our duties, right will not be far to seek. If leaving duties unperformed we run after rights, they will escape us like will-o-the -wisp. The more we pursue them, the farther they will fly.  -Mahatma Gandhi

Cheers to us for having stepped towards platinum jubilee of Indian independence. Wouldn’t it have added more to that celebration if there had been a true sense of oneness among us all for the responsibility which all of us hold towards the motherland? Undoubtedly it would be like a moment ecstasy for the nation’s pride book.

Rights and Duties are not only reconcilable but also inseparable, we have grown up listening right follows duty. Can we question ourselves the same when the issue of Fundamental Rights and Fundamental Duties comes in frame? Do we discharge our Fundamental Duties with awareness or are we among those who are always ready with the weapons called Art 32 and Art 226 of the Indian Constitution? Undoubtedly majority of the hands will raise for the second half of the question.

The major difference between the rights and duties apart from their respective Parts and Articles is of course their enforceable and non-enforceable natures. While the rights are one of the most actively exercised part of the constitution, duties seem to be very dormant and less exercised part. Even if we talk about the extent of awareness then also it can be easily said that awareness of rights is rampant while that of the Fundamental Duties is rare or uncommon. Furthermore, there is a vast difference between the exposures which these constitutional parts hold individually. The first step which needs to be done for acquiring the status which the rights hold is working on its awareness.

Rights have always demanded some duties and same goes with the Fundamental Rights but here it is clearly visible that Fundamental Duties are always on a lower footing despite its dire need for emphasis for the nation’s development. And for the fundamental duties the things have to be started from scratch.

Fundamental Duties being one of the most basic elements of the Indian Constitution has its own importance. Though at the time of enactment of the Indian Constitution Fundamental Duties were not added explicitly but it was always implicitly embedded in the constitutional articles along with the Fundamental Rights and Directive Principles of state Policy. At the time of incorporation, the need to add these duties were not felt as the era had a sense of responsibility among its people which was a part of people’s life in such a way that there was no need to impose those duties on them by its vivid codification in the Constitution. Time passed and the feeling of nationalism and dedication towards the country faded and a time came when the need to codify, remind and implement the Fundamental Duties among the Citizens came. As a result with the 42nd Amendment Act in 1976, Fundamental Duties were added to the constitution in part IV ‘A’ under Article 51A.Earlier there were only 10 fundamental Duties and later on the 11th one was added by the 86th amendment in 2002.It does not mean the before 42nd Amendment ,citizens had no duty. There was a specific provision in Article 33 regarding the need “to ensure the proper discharge of duties and the maintenance of discipline” among the armed forces etc. Also each of the Fundamental Rights of individual citizens and others embodied in part III of the Constitution implied a corresponding Duty and obligation.

Raison d’etere for Article 51 A

On 29th May, 1976 Parliament adopted the proposal of Dr Swaran Singh Committee for the inclusion of duties and obligations in the Constitution of India. Recommendations were also made to provide penalty for non-compliance of duties. Directive Principles and fundamental duties as incorporated under Part IV and Part IV A of the Indian Constitution are directly not enforceable but to ensure their compliance certain laws are to be enacted. Fundamental Duties are in consonance with Article 21(1) of UDHR which says “everyone has duties to the community in which alone the free and full development of his personality is possible”

The J. S. Verma Committee was set up to for the constituted by the Government of India to operationalization of the suggestions to teach Fundamental Duties in India. NCERT was approached and was asked to submit a status note on Fundamental Duties and the orientation in NCERT curriculum after the committee was set up by government on fundamental duties. The status report reflected the inclusion of fundamental duties in the core curriculum laid down in NPE (1986, 1992) and also in National Curriculum of Elementary education and Secondary Education 1988. The NCERT was also approached to make an analysis of its curriculum—National Curriculum framework , Guidelines and syllabi and Textbooks with a view to make a detailed assessment of existing position in respect of extent of coverage in various sub clauses of fundamental duties. NCERT itself has done an extensive analysis of 52 different textbooks on EVS, history, Geography, Civics, Hindi language and literature and science. Efforts has been made to recast the andragogical and pedagogical processes that can meaningfully contribute to education in fundamental duties. But even now Fundamental Duties are not something well known or taken care of.

Perspective to the Duties

There are 3 basic ways of looking into the Fundamental Duties:

Although unusual these action verbs indicate important expectations of the nation from its citizens. There are two types of verbs used—

Thus the expected outcomes of a deliberate programme of education in fundamental duties are understanding, appreciation and action. This essentially involves a wide range of cognitive levels.

At the present scenario we can see that the government websites have Fundamental Duties displayed somewhere on the home page, Legal Services Authorities are working for its awareness to some extent. But this is not enough for this great work to be implemented. The Indian Government needs to take inspiration from countries like Russia and Japan for proper implementation of the concrete part of the Fundamental Duties by giving more emphasis to duties in the coming days. As empowerment of the citizens is wise when they are well aware and obedient with their Fundamental Duties. After all the miracles which the discharge fundamental duty with a feeling of nationalism in such a big democracy can do no other movement revolution can. Concluding it with a quote which gives a beautiful logic for abiding those moral obligations.

Do all the good you can

By all the means you can

In all the ways you can

In all the places you can

At all the times you can

To all the people you can

As long as ever you can