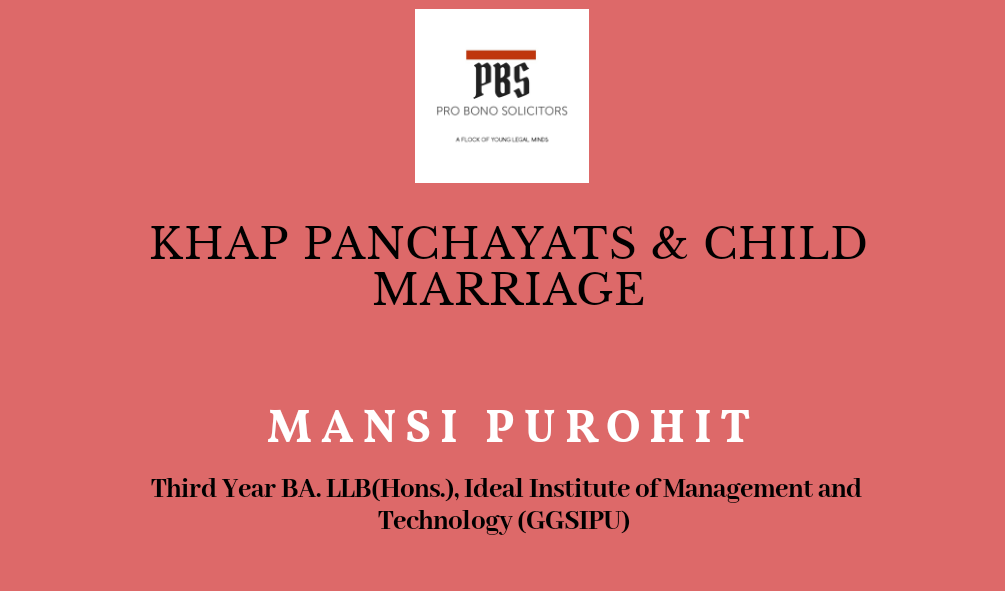 This article is written by Mansi Purohit, a Third Year B.A. LL.B (Hons.) Student at Ideal Institute of Management and Technology (GGSIPU), Delhi.

Child marriage is a truly global problem that cuts across the countries, cultures, religions, and ethnicities. Despite many attempts of legislature and courts, it continues unabated and also actively promoted. This article dwells into the existence of early marriage with special references to the Khap Panchayat and their role in promoting early marriage.

“Khap” is an ancient concept whose references are found in the Rig Vedic Era. These are socio-political groups, which usually consists of upper caste and elders of Jat community.

Child marriage is stated as the marriage of a girl or boy before the age of 18 and refers to both formal marriages and informal unions in which children under 18 live with a partner like a married couple.

This article portrays the existence of early marriage with special references to the Khap Panchayat and their role in promoting early marriage.

The Khap Panchayat is an association of several villages, mainly in northern India, although it is found in similar forms in the rest of the country. These panchayats occupy the states of western Uttar Pradesh and eastern Rajasthan but are more likely to be found in the Rohtak, Jhajjar, Sonipat, Bhiwani, Karnal, Jind, Kaithal, and Hisar regions of Haryana[1]. The Khap Panchayat consists of villages organized by five men in a political council aiming for social control. These panchayats are well-established conflict resolution institutions. Minor issues are dealt with by gram panchayats, while serious issues are decided by Khap Panchayats. They have recently emerged as quasi-judicial bodies, inflicting harsh punishments based on ancient customs and traditions, often resulting in reactionary measures to modern problems.

There are many examples of how the Khap Panchayat has supported the risk of child marriage. The treasure behind the forced marriage between children, between an adult and a child, or between adults. Forced marriage victims are forced into torture, kidnapping, intimidation, mental intimidation, and even suicide.

“A Khap Panchayat of the Meena community in Rajasthan’s Dausa district has ordered the abduction of Santara Meena, a 25-year-old teacher in a government-run school.”[2]

The Khap issued an order to a teacher who refused her marriage which happened 12 years ago when she was a child and now wants to get rid of her husband. The Khap representatives ordered the woman to be brought before them alive or dead.

WHY ARE THEY IN NEWS?

Khap Panchayats have always been in limelight because of their hard core realities like female feticide, honour killings, forced marriage, etc.

In Haryana, a girl committed suicide after being raped by four people. Instead of condemning the incident, Khap representative Sube Singh said: “Boys and girls should be married by the time they turn 16 so that they do not stray…This will decrease the incidents of rape”.[3]

Only the “people” support these institutions and show greater compliance with their provisions than the law of the land. They support such institutions because these institutions are respected among the villages. The villagers have followed this system for many years, and therefore did not challenge nor question their authority. They will not generally oppose the decisions of the Khap party, even if it is against their will. They follow orders without question to maintain “social order”. A major disappointment among the panchayats was the internal weakness of democratically elected Panchayati raj institutions. Furthermore, the Jats, which make up 25% of Haryana’s population, are the largest caste group in the state, and because of this, Haryana has become the center of its evil form in rural areas like honor killings. In many villages, the government has not been able to take appropriate measures to reduce this risk and since no legal action has been taken against them, their authority remains unquestioned. Even the police ignore the khaps actions, because of the strong influence it had on people and villages over time. The Congress president Sonia Gandhi visited the girl in Haryana who committed suicide after being allegedly gang-raped. Although she criticized the incident, she did not utter a word against the state government led by the Congress.[4]

On the 27th March 2018, the Supreme Court gave a landmark ruling in the Writ Petition (Civil) No.231 of 2010- Shakti Vahini Vs. Union of India[5], that any attempt by khap panchayats or any other assembly to prevent two consensual adults from marrying is absolutely “illegal” and institutions in the region take preventive, remedial, and punitive measures.

The decision came based on a petition filed in 2010 by NGO Shakti Vahini. The petitioner wants to develop a scheme to reduce honor killings from states and the Center. The judgment was delivered by the three-judges’ bench. The court held, “the criminal cases about honor killing or violence to the couple(s) shall be tried before the designated Court/Fast Track Court earmarked for that purpose. The trial must proceed on day to day basis to be concluded preferably within six months from the date of taking cognizance of the offense. We may hasten to add that this direction shall apply even to pending cases. The concerned District Judge shall assign those cases, as far as possible, to one jurisdictional court to ensure expeditious disposal thereof.”[6]

The judgment also states that the “Khap-Panchayat” should not take the law into its own hands and should not occupy the capacity of the law implementing agency as this power is not conferred on them under any law.

Some international treaties, such as the agreement for the determination of marriage, determine the minimum age for marriage, registration of marriage, and the age of consent for other marriages. Besides, various implications for the mental and physical health of children is another major issue.

Panchayats should not interfere in matters of marriage, but they continue to do so with complete independence. Courts must now prosecute aggressively and impose preventive punishments to control their interference in the lives of innocent children.