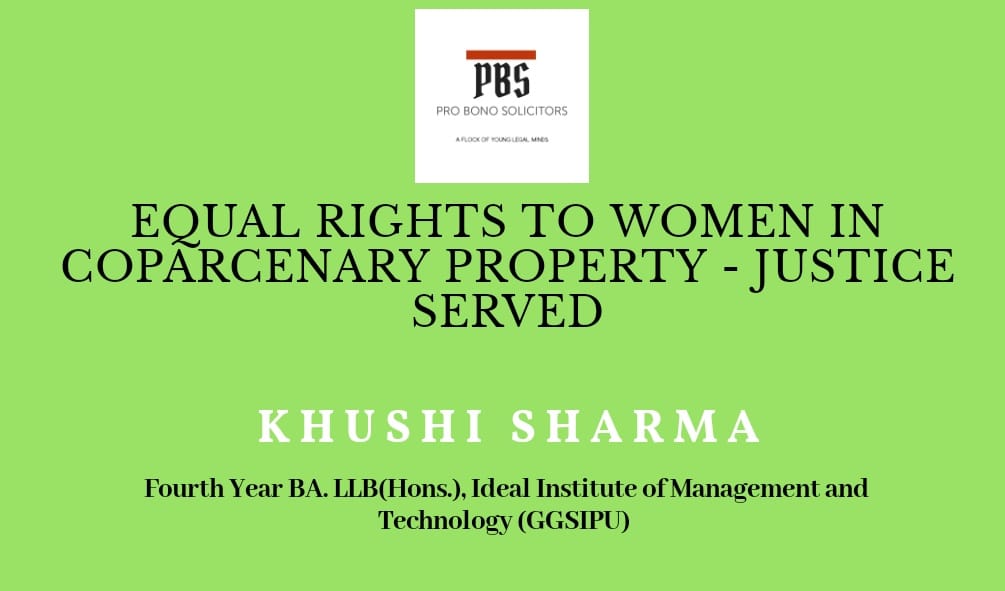 This article is written by Khushi Sharma, a Fourth Year B.A. LL.B (Hons.) Student at Ideal Institute of Management and Technology (GGSIPU), Delhi.

“An inherent right provided to the children, but still is subjected to gender bias? How is it possible that discrimination of rights always lands upon the women”…This is an exhaustive Article which deals with the recent judgement on coparcenary rights of a woman which lifts the veil of darkness for them.

The right of women in the coparcenary property has always been a debatable topic with various cases crashing through the courts and various amendments hitting the roof. The Supreme Court of India has finally arrived at a decision regarding the same. Conceding the importance of referring equal rights to both the daughter and the son, Justice Arun Mishra, S. Abdul Nazeer and M.R Shah expressed while calling about the operative part of the judgement that “Daughters have to be given an equal share of coparcenary rights in the share of property like the son.”

But here an imperative question is raised that “why were women not considered to be the coparceners with equal rights on their father’s property in the first place?” or “what has been the history behind all of this? It is really surprising, but this conflict goes way back in time and according to me the justice served in regard to this is prolonged justice. This Article aims to critically analyse the entire situation with relevant case laws and Statues.

History of women as a coparcener

The succession of property regarding Hindus, Jains, Sikhs and Buddhists is governed by the Hindu Succession Act, 1956 [1]. Women’s right under a succession of property or as being a coparcener has always been in minority as compared to the sons of the family. There have been many cases in which equal rights have been denied to women and this has been going in continuity since a long period of time.

Women’s status as a property successor before the 2005 amendment

The condition of women before the 2005 amendment [2] was incongruent. The 2005 amendment changed the provision of Section 6 of the Act[3]. Prior to that Section 6 conferred the succession of the property to only the sons of Hindu Undivided Family (HUF). HUF’s are the family which are connected with one common ancestor and lineal descendants of that ancestor. HUF disregarded women and made their status unstable with respect to property.

The rights provided to women (daughters and mothers) were merely limited to the right to be maintained or the right to share in the property as when the partition under HUF took place.

Males of the family were considered to be coparceners whereas females were considered as only members. Women could also not be the Karta (the head in HUF) of the family because they were not made the coparceners. Not only this, a woman also ceases to become a member of HUF of the father (proportionate to not being maintained) when she gets married and also is denied the share in the property, if partition takes place following her marriage.

Women’s status as a property successor after the 2005 amendment

There was still a lack of absolute rights to the women as the equality of rights were only given to the daughters, who acquired such rights by birth in the family and not to the women who came into the family by the virtue of marriage. Others still had restricted rights of only maintenance and share in the property at the time of partition.

The amendment raised the status of married daughters. Such daughters ceased to become a member of the Hindu Undivided Family as earlier but still continued to be the coparceners of the property. Thus, she is capable of asking for partition and also to become the Karta of the family, if in case she is the eldest member. In any case, if the married daughter is dead, the shares of her property will be given to her children, if she was alive at the time of partition.

The debatable issue has finally been put to an end by the Supreme Court in a recent judgement. The issue of conflicting views were started with two different cases:

A two-Judge Bench held that if the father of the daughter has passed before the 2005 amendment she will not be made the coparcener.

A two-Judge Bench, in this case, held that even if the father has passed before the amendment year, still the daughters will be made coparceners.

This conflicting view was resolved in by the three-Judge Bench of the Supreme Court in a recent judgement of Vineeta Sharma v. Rakesh Sharma [6] and held that the daughters should be kept at par with sons and should be given equality in rights as both have acquired rights by birth and there is no reason of discrimination for the same.

The Court stressed on the point that irrespective of whether the father was alive prior to amendment or not, it is of no use as the daughter’s right depends upon the acquisition of rights by birth and is not subjected by the death of the father in any sense. The highlight of the judgement is to remove any kind of gender discrimination associated with Section 6 and making the children’s right equal as it should be.

Further important keynotes of the judgement are as follows:

The pendency of cases with respect to the succession of property is in a huge bulk, the time limit restricted by the Court is a good initiative and the judgement of the Court to remove all the gender biases is stepping stones for a better India.