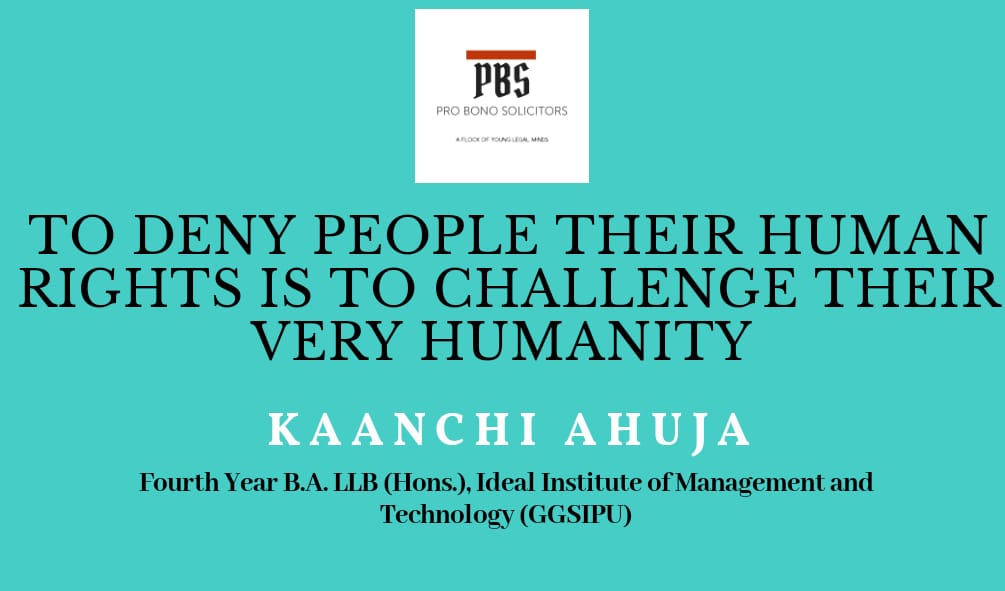 To Deny People Their Human Rights, Is To Challenge Their Very Humanity

It has been rightly said and I quote, ‘Rights are in fact those conditions of social life without which no man can seek in general to be himself at his best.’

Human rights are at the heart of the Sustainable Development Goals (SDGs), as in the absence of human dignity, sustainable development cannot be achieved. Human rights can also be explained as those prerequisites which should be available to everyone, irrespective of their religion, race, caste, sex or nationality.

On December 10, the National Human Rights Commission (NHRC) observes Human Rights Day. The day is celebrated every year to commemorate the Universal Declaration of Human Rights (UDHR), which was adopted and proclaimed by the United Nations General Assembly (UNGA) in 1948. This year marks the 72nd anniversary of adoption of UDHR. This declaration was momentous because it was for human rights, was recognised and codified for the first time and steps were taken for its preservation.

The power of Universal Declaration is the power of ideas to change the world as it inspires each and every one of us to work towards the goal of attaining freedom, equality and dignity for all. It can be reaffirmed that man under human rights is very disparate from being a man of religion and philosophy. It recognises that man has inherent dignity and equal and inalienable rights.

The basic beliefs and postulates about man are that all human beings are born free and equal in dignity and rights; they are endowed with reason and conscience; they should act towards one another in the spirit of brotherhood being members of the human family and that everyone has the right of recognition before the law.

It is the basic assumption of the United Nations Organisation (UNO) that these rights are the foundation of freedom, justice and peace in the world as stated in the preamble. They nurture and advocate social progress and better value of human life. A common understanding of these rights and freedoms would promote the development of friendly relations between nations and the cooperation with the United Nations. These rights are closely connected with freedoms and their goal is enjoyment of life. There is no hierarchy, stratification, privileges or immunities in the possession of these rights.

Everyone is guaranteed all the basic rights without distinction of any form, such as race, colour, sex, language, religion, property, birth or other status. It does not accept any distinction made on the basis of the political, jurisdictional or international status of the country or territory to which a person belongs. This position has universal recognition and is supported by international forces. There are different types of rights such as political, economic, social and cultural rights.

Everyone has the right to take part in the government of his country, directly or through representatives, thereby implying that the will of the people shall be the authority of the government. But democracy does not mean merely the right to vote and send representatives to the Parliament or the legislator. It includes much more, expostulates the multiplicity of parties and a politically aware electorate which can make an intelligent choice between the parties on the basis of the political ideology and manifesto.

Everyone has the right to own property. No one shall be deprived of his property under except due course of law. Every citizen has the right to social security which is a system by which the government pays money regularly to people who have no other income or only a very small income.

In India many schemes such as Swarna Jayanti Rozgar Yojna, Jawahar Rozgar Yojna and integrated Rural Development Programmes have been implemented and in America too, the unemployed citizens acquire financial assistance from the government. People should have the right to a standard of living for their health and well-being and this includes proper food, proper clothing, housing, medical care or necessary social services.

The family is a natural and fundamental unit of society and shall be empowered to full protection by society and the state. A mother and her children are entitled to special care and protection under the state law. Men and women of full age should have the right to marry and raise a family. Marriage shall be entered into with the consent of the intending persons. Additionally education at least in elementary level should be free of cost.

The cultural rights guaranteed the people the right to protection of moral and material interests resulting from any scientific literary or artistic production of which he is the author. They have the right to freely participate in their cultural ritual and practices. In other words everyone has a right to enjoy the arts and to share in scientific advancement and its benefits

Therefore for all these rights can be put into the following categories:

A number of organisations work towards the protection of Human Rights. To name a few, some of them are International Covenant on Civil and Political Rights, United Nations Human Rights Commission, Non-Government Organisations, and Amnesty International

Hence it can be concluded that the world during the last few years has seen a rise in gross violations of human rights. The responsibility now lies on us to prevent the misuse of power and that the rights of the common man are protected. Only meticulous and dedicated efforts on the part of the individuals along with the governmental and non-governmental organisations will help in the human rights being safeguarded.