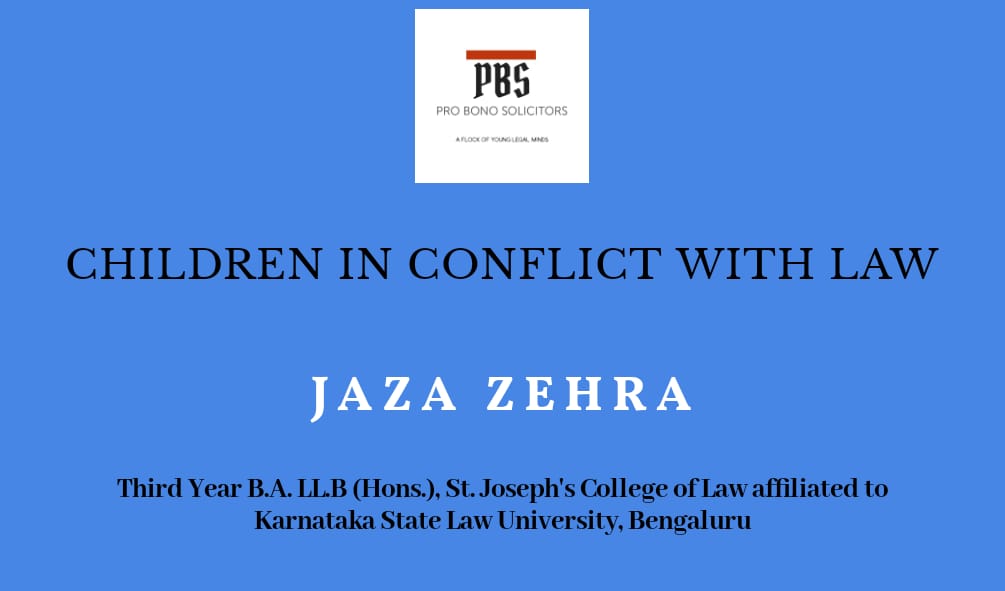 CHILDREN IN CONFLICT WITH LAW

The term “children in conflict with law” refers to any child who is below the age of 18 years and encounters the criminal justice system for offences committed by him/her or on suspicion of commission.  There are various perspectives when it comes to the treatment of a child In conflict with law. The juvenile justice system is still young and trying to adapt to the changing times to find a definite place in the society.  Through this article, the author traces and analyses the origins of juvenile justice in the world and India, while discussing what goes into the making of a criminal and the psyche of a child coming in conflict with law. She also highlights the importance of rehabilitation and protection of such children, to bring them back to a civilised life in the society.

The history of juvenile justice in relation to any other branch of law, is a short one. While it is in the nature of a child to ‘rebel’ or to have deviant behavior almost like it’s a fact of life, the substantial intervention by a formal, organized society has only been seen in the last century or two. When most of history is examined, it is found that once a child reached the age of 5 or 6, they would be treated as a full-fledged member of society, and a part of that meant all the laws and mandates applicable to an “adult” would be applicable to them. In case of a child being in conflict with the law, there existed no separate system dealing with them and hence was tried the same way as an adult. As children or as youthful members of society, unfortunately, they did not enjoy a separate status that brought with it a distinct yet legitimate set of expectations, behaviors, and privileges.

In the early 19th century, Western society was undergoing major shifts. There was growing urban poverty and out of establishments to address the same, emerged methods and ways to deal with offending youths. The most primary method for dealing with the poor entailed training the children of the poor. This training focused at removing the children from “bad influences” and substandard training of their parents.

Understanding the concept in Indian Perspective

Looking at it in the Indian context, while there were a few laws regulating this area, it is only after the Independence, with an aim to provide care, protection, development and rehabilitation of neglected or delinquent juveniles, our Parliament enacted the Juvenile Justice Act, 1986. Later, the Parliament enacted the Juvenile Justice (Care and Protection) Act, 2000 replaced by Juvenile Justice (Care and Protection) Act, 2015 which allows for juvenile in conflict with law in the age group of 16-18, involved in heinous offences, to be tried as adults.

Tackling this issue is not easy because the young minds can be led to wrong path as easily to the right path. A problem as sensitive as this needs to be solved in a way that completely eradicates the issue from the society at large. For that, it is important to address the root cause of the crime rather than the act itself. No one is a born criminal. Circumstances makes them so. The life and overall personality of a child is influenced heavily by the socio-cultural environment, both inside and outside of his/her home. Some of the most common causes which are associated with juvenile crimes are: Poverty; Drug Abuse; Anti-social Peer Group; Easy availability of firearms; Abusive parents; Single-parent child; Nuclear Family; Family Violence; Child sexual abuse and Role of Media. Most of this can be traced back to the kind of atmosphere the child is being brought up in. Alexander Den Heijer puts it up beautifully in a quote, “When a flower doesn’t bloom you fix the environment in which it grows, not the flower.”

One of the most important thing to keep in mind while dealing with children involved in such conflicts with law is to make sure they understand what they have done. There needs to be a personal approach since every child is different and needs different kind of support which is specifically formulated / tailored for them. Training and education programmers need to start at an early age and there has to be a proper system for support and guidance.

There is also a need for early intervention. Parents, teachers and others around tend to ignore the behavioral patterns in children at young age and their mistakes are looked over and justified as “an innocent mistake”, they “will learn when they grow up” and “he/she is just a child”. When a child makes a mistake, it is important to point out in a way so that they understand and don’t repeat it. The manner in which the mistake is pointed out also makes a huge difference and impact on the child.

While all of the above helps in reducing incidents of children being in conflict with the law, there is more to it. Going beyond the socio-economic boundaries of the issue at hand, it is important to look at the psychological factors that influences these conflicts.

There is a similar pattern that one can trace while looking into the said cases; these are children that are having or have had troubled childhoods, they have problems of depression, lack of personal attention, emotional detachment and deprivation, suicidal tendencies, phobias, body image issues, lack of bonding, low self-esteem, anxiety, personality problems, adjusting in the society, bullying and so on.

Psychological factor is something internal and personal to each person so the essential question that arises is how to deal with this?  It majorly comes down to imparting life skill lessons to children from a very young age. This helps in equipping them with their rights as well as the corresponding duties. When the concept of rights vs. duties is understood by a child, only then he/she shall be able to enjoy and exercise his/her rights without infringing on the similar rights of others. There is also a need to increase participation of these children in the society to make them feel more inclusive.

Most importantly, a child should not be looked at as a ‘criminal’ or an ‘offender’. While he/she needs to be brought to book, the approach needs to be more reformatory than punitive and they should be equipped with enough knowledge of their rights along with their limitations. A child should be sent to rehabilitation and reformatory institutions to provide him a better future with better life chances.

Juvenile justice is still young but has undergone a range of transformations. Today, juvenile justice system is still seeking out its appropriate form and place in society. Thereby it is unlikely to completely diminish anytime soon, it is exactly untold what it will appear like in the future.