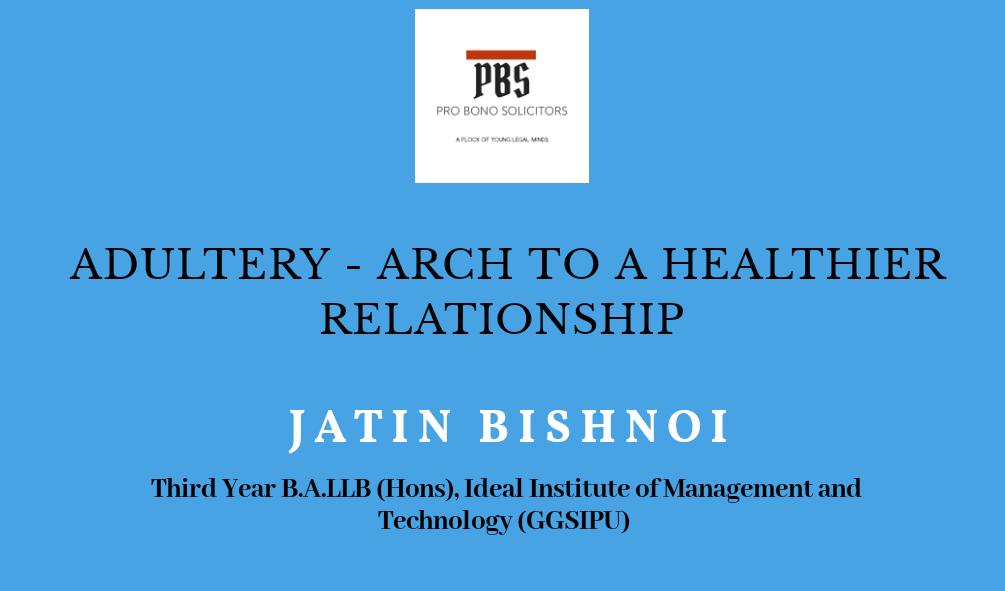 Adultery – Arch to a Healthier Relationship?

This article is written by Jatin Bishnoi, a Fourth Year B.A. LL.B (Hons.) Student at Ideal Institute of Management and Technology (GGSIPU), Delhi.

Adultery and/or cheating on your partner has always resulted in a wrecked relationship. But what if an individual presents a reasonable justification for the same? The author presents an insight on the topic with the help of values such as mutual respect, understanding and trust and regards such values instead of intimacy, as the foundational basis of each and every relationship.

“Adultery can be defined as extramarital sex that is considered objectionable on social, religious, moral, or legal grounds.” Although the sexual activities that constitute adultery vary along with the social, religious, and legal consequences but the concept exists in many cultures and is similar in Christianity, Islam, and Judaism. A single act of sexual intercourse is generally sufficient to constitute adultery. When discussing adultery, the article include both pre and post extramarital sex (pre-marital sex i.e. sexual-intercourse with someone outside the bounds of the coupling).

All of us who have been in relationships or have been around the people in relationships have observed that the highest prominence in relationships is awarded to intimacy. Everyone thinks that intimacy is the most important part of a relationship and once they have achieved the pleasure of that company, they conclusively have fulfilled the denotation of the word relationship. But unfortunately, our beliefs into this “expression of love” to be referred to, is not justified. Anyone in their sane mind would hate to break the fact that sexual intercourse should not have a sacramental value. Being a conflicting topic itself, according to society it can be the purest and the most impure act between two beings at the same time.

On behalf of evolving and recently pubescent mindset, I would confidently mention in my personal opinion that sexual intercourse is not meant to be the most centered part of a relationship. Scientifically backing my statement, sexual intercourse only leads to pleasure, more practical thinking and validation to appearance, of both partners. As per the basic concepts of foundation of relationship, it is mostly unrealized to the couple that their relationship is particularly based on mutual trust and understanding.

For the prevailing and further evolving society dynamic and unsettling lifestyle is more attractive than decency and permanence, hence the fear of advancing towards permanent relationship prevails. Considering the limitations as in, waking up to the same face every morning, unable to interact with the world without the leash of your relationship tied around your neck, limited interactions with old acquaintances, special time needed to your partner and the list is unending. This implicates both the partners in the relationship, simultaneously. When this prevails for a longer period, after you have “achieved the couple-goals”, and intimacy is just a midnight snack for both, there comes a moment of realization to either of the partners that maybe permanence was not the answer he/she seek when relationship was the word called for, or needed a break from the same face in bed every night. To be transparent, one can doubt his/her choice of permanence in the relationship. Hence, one can develop second thoughts of experiencing another partner in the bed for a while[1]. According to psychological researches on post-intercourse behavior and thinking, after most of the events at least one partners or both gets second thoughts about the event, even after being pleased. Evidently, after a series of events on a continuous basis, the spark or the pleasure of mint-fresh intercourse fades due to often occurring and bedding the same partners throughout the course of time. Even as cited in “Hindu Marriage: Sacrosanct or Contract[2]” by Mayank Tiwari states that “First, the Hindu marriage is desired for the fulfilment of Dharma of a householder and not primarily for sex.”

Consequently, the reason for disappearing interest in sexual intercourse is going to bed with and waking up to the same face for a prevailing course of time, which leads to discrepancy between the couple.

The only solution to this delicate situation is transparency. If the partners discuss the issue of discrepancy which either or both of them are facing, realizing that the act of sexual intercourse is not the foundation of their relationship. And taking into account views of each other rationally, the relationship could result in freshly nourished mutual understanding towards each other and continue the course further successfully. The issue being addressed here would be discrepancy and the ultimate solution to it is a tasteful short-term extramarital sex, which should prevail for a shorter period, most probably 4-7 days fulfilling the needs of the partners facing issues and later subjecting him/her to the continuous path of their relationship[3].

Therefore, I would ultimately concise my views on the topic that, mutual trust, understanding and compatibility is the basis of every relationship which is mostly unrealized to the couple, which often presume sexual intercourse and intimacy as the foundation throughout their relationship. And rising discrepancies due to continuous sexual intercourse may disrupt the smooth course of relationship, when one or both partners loose interest in the intimacy and begin to have second thoughts upon having an extramarital sex for a short period of time to reconcile his/her interest towards their respective partners.

Criticism appeals that if one partner is allowed to have an extramarital sexual intercourse, during the phase of discrepancy, he/she may like it better and prefer to do it more often. Hence, to be defensive to this issue, the partner with the discrepancies should be aware that his/her better half is a compatible and mutually understanding partner, who was chosen by him/herself for all future endeavors of which intimacy is only a part. Therefore, if the extramarital sex is more pleasing, it is only for a matter of time, also the performer should be aware that his/her mutuality and compatibility lies with the better half oneself.

Whenever someone mentions marriage or relationship, before the concept of love or affection we are struck by the concept of sexual intercourse, which is a poignant conclusion to the purest form of relationship between two strangers. Though, we all can agree to the fact that relationships (pre and post marital) are founded upon the feeling of mutual trust and understanding, which should evidently strike our minds instead of anything else when the concept of relationship is being discussed.