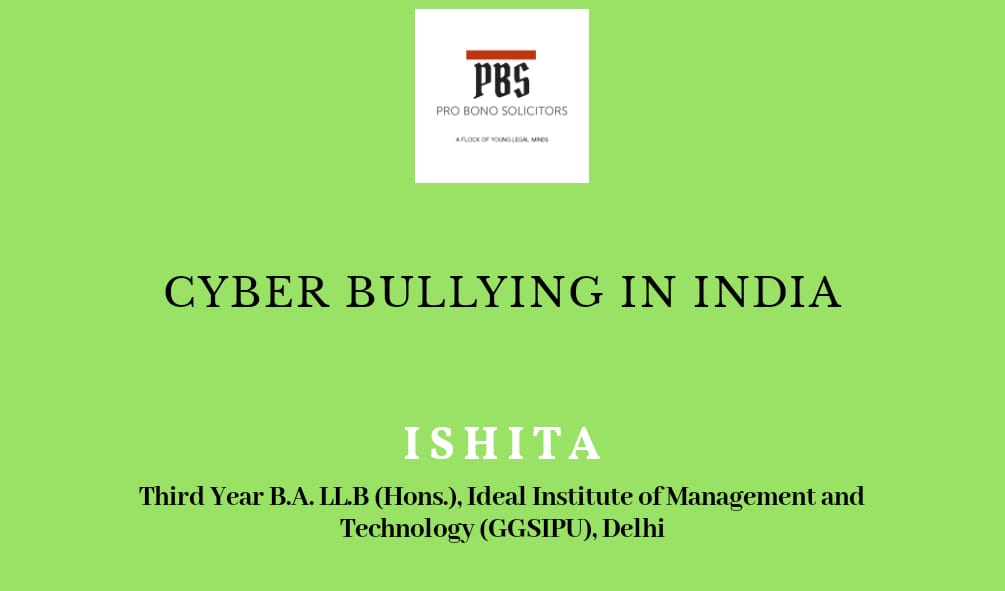 Bullying is a slow and painful trauma and probably someone we know right now is suffering in silence. Bullying is not just any mean behavior. It is an intentional mean behavior displayed to another individual on purpose, who usually feels helpless and alone.

India as a country stands third in cyber bullying[1]. In India, a lot of adolescents have seen a morph image or video of themselves and most of these were not reported to the police. Total of thirty seven percent of parents across India, [2](which is highest in the world) confirmed that their child was bullied online with fifteen percent of the total saying that such a behavior occurred on a regular basis[3]. Globally on an average over half of adolescence and teens have been bullied online about the same number engaged in cyberbullying. More than one in three people have experienced cyber-threats online. Over twenty five percent of adolescents and teens have been bullied repeatedly through cell phones or the internet and shockingly over half of young people do not tell their parents when cyberbullying occurs. All around the world over eighty percent of teens use mobile phones regularly[4]. Phones and other smart appliances are the most common form of technology and a medium for cyberbullying.

Cyber-bullying is a kind of bullying, harassment, intimidation, or stalking whereby electronic means are used to carry out bullying through social media or messaging apps. Cyber-bullying has become a common sight among teenagers as the digital domain and field has expanded with advanced technology. Cyberbullying takes place when an individual or intermediary harasses any specific individual or generally anybody on social media sites.

Serious and harmful behavior which can lead to criminal consequences based on Cyber-bullying include posting rumors, threats, a victims personal information or morph images or derogatory labels including hate speech.

This tragic consequence of cyberbullying on the victims could be that these victims under good expression, increased suicidal tendencies, lower self-esteem and a range of negative emotional responses including being and feeling nervous, anxious, sleepless, worried, distress, frustrated, outraged, angry, miserable and so on.

Internet trolling is a common form of bullying that takes place in an online community in order to provoke an extreme reaction. Unfortunately in certain cases

(Which is another kind of bullying or harassment by using electronic communication to stalk a victim) may actually present a possible and real threat to the victim’s safety, life and liberty.

Children in India reported the third highest online bullying rate after China and Singapore[5] Among the twenty five countries surveyed under a European commission project by Microsoft Corporation to understand the global pervasiveness on online bullying[6].

SMC Pneumatics (India) Pvt. Ltd. v. Jogesh Kwatra[7] was the first case of cyber defamation in India. It was assumed by the Court of Delhi, the jurisdiction over a matter where corporate reputation was being defamed through emails and passed an important ex-parte injunction. In this case, Jogesh Kwatra ( the Defendant ) being an employee of the plaintiff’s company started sending defamatory, derogatory, obscene, vulgar and abusive emails to his employers to defame the company and its Managing Director Mr. RK Malhotra all over the India and the world. After hearing detailed arguments of counsel for plaintiff, Hon’ble Judge of the Delhi High Court passed an order which assumes this tremendous significance for the first time that an Indian Court assumes Jurisdiction in a matter of Cyber Defamation and grants an ex-parte injunction restraining the defendant from defaming the plaintiff by sending him defamatory, derogatory, abusive, obscene emails either to the plaintiff or their subsidiaries.

There is no specific law which focuses on cyberbullying but certain provisions exist where such an act of cyber-bullying is treated as a criminal offence. These statutes are:

Section 292A: Dealing with printing, etc. of grossly indecent matter intended for blackmail.

Section 354A regarding sexual remarks, sexual harassment with three years of imprisonment and/or fine.

Section 354D: stalking with the use of the internet, email or any other electronic communication. Punishment: first conviction with imprisonment up to five years and shall also be liable to fine.

Section 354C forbids the offence of voyeurism i.e. the act of capturing and/or viewing the image of a girl or woman going about her private acts, where she thinks that no one is watching her is a crime.

Section 549 deals with expressions intended to insult the modesty of woman.

Section 67 and Section 67A deal with publication or transmission of obscene material in electronic form containing the sexual explicit act.

Section 66E deals with violation of privacy through electronic media.

3.  The Protection of Children from Sexual Offences Act, 2012 (POCSO Act).

It protects children bellow the age of 18 from any form of sexual harassment, sexual assault, and pornography includes cyberbullying.

Suggestion for Protection and Safeguard of Victims of Cyberbullying

In India, the Ministry of Women and Child Development and the Ministry of Home Affairs (MoHA) have launched dedicated helplines and portals for reporting crimes against women and children including cyber-bullying crimes.

One can also protect their smartphones, tablets, laptops and computers with passwords and finger lock and change it on a regular interval so that no one can hack it. By updating your software constantly, when an update is announced for your smartphone’s operating system or for any of the apps we use then install it without any delay. And by avoiding using public Wi-Fi for anything because it is open season for all kinds of online mischief. Keep your mobile phones private, avoid sharing tons of information about yourself on social networks. Spam and phishing emails is one of the easiest ways for hackers to invade your phone and access your information so avoid clicking on links in promotional emails. Use anti-virus apps which provide enhanced security and use two-factor authentication which is hated because it requires an extra step, and it is really painful if you forget your phones or watch, but like passwords, it provides an extra layer of protection in case someone gets ahold of your password.