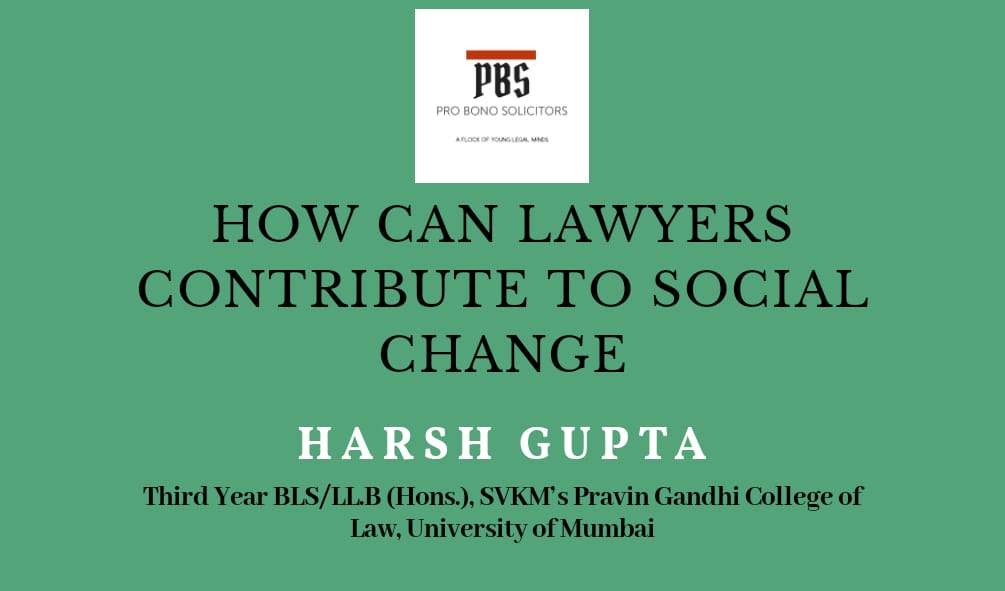 HOW CAN LAWYERS CONTRIBUTE TO SOCIAL CHANGE

This article is written by Harsh Gupta, a Third Year BLS/LL.B. (Hons.) Student at SVKM’s Pravin Gandhi College of Law, University of Mumbai.

Lawyers being an integral part of the society not only serve their own purpose or daily needs but also create or we can say try to create an impact on the society as a whole. The basic reasoning behind the importance of lawyers is that all human beings are equal, and each person deserves an equal opportunity to receive legal justice. Because lawyers are easily accessible and readily available to people across the globe, people have a decent chance at accessing the justice that is due to them.

Without lawyers, you would have no one to protect you from abuse and misconduct  of the law.

Without lawyers, if a police officer violated your rights, you would have no one to stand up for you. And the prosecutor would happily walk all over you.

Because of the continuous change in the civil laws over the years, they have become highly complex. Coupled with an equally complex legal system supported by the courts, lawyers in many ways have become vitally important, as they provide, in many cases, the only viable access to the legal system that members of society demand for. Legal counselors can also be vital as they are able to legally represent their clients and deal with a wide range of cases when a layperson could not, or cannot represent themselves.

As the laws across the globe  have extended and enhanced, so have the skills of legal advisors. Regularly, lawyers will spend significant time in only one field of the law. This engaged skill empowers these legal counselors to give a significantly progressively point by point administration to their clients. Regularly, individuals will require profoundly specialised assistance with a legitimate issue, be it family law, defamation, and pro legal counselors can help, support and instruct on the field concerning law they have expertise within and thus contributing to the society in bits and pieces.

Public lawyers aid legal causes for the greater societal good and assist those who need legal aid and might not be able to find so on their own because of financial problems. Underprivileged people, elderly, victims of domestic abuse and children are among the beneficiaries of lawyers. Such legal advisers serve an important societal and moral purpose through their existence.

Apart from fighting cases, lawyers provide their skills and knowledge to the society by undertaking pro-bono cases(Cases for free) and lending legal services to the poor and needy. A great amount of change has been brought upon by the legal aid services in India. Legal Aid implies giving free legal services to the ones who badly need them  who cannot afford the services of a lawyer for the conduct of a case or a legal proceeding in any court, tribunal or before an authority because of financial problems.

Lawyers contribute to our society to make it more liveable…..

The legal framework affects our society in many ways, and lawyers contribute to the growth and freedom of society. Lawyers give individuals a sense of security to pursue their life goals knowing someone will have their back if they need it and thus acting as a support system whenever required. Lawyers who practice law with ethics and integrity should contribute to the well being of society by promoting justice through fair procedures..

Lawyers work as advisors to their clients, informing them of their rights, briefing them about the processes of law and helping them navigate the sometimes-tricky legal system and finding solutions accordingly.

Without lawyers, individuals would have to research the law and previous judicial decisions and understand how those decisions and laws apply to their circumstances and still not get the fair idea of the problem and ending up going in the wrong direction which might affect their lives. Lawyers dedicate their lives to understanding the law, and will help apply the law to their clients’ cases with the best interests of their clients in mind.

Lawyers played a central role in drafting of constitution

As it is widely known, a number of lawyers gave up their lucrative/fancy practices to play key roles in India’s Freedom Struggle. Some of these lawyers were instrumental or important in framing the laws that would govern our country for the next seven decades and counting. One of the most recognized bodies which was  responsible for creating the Constitution of India was the Drafting Committee, all of the eight original members (Chairman included) of which had a legal background or were lawyers.

While drafting the constitution the proceeding clearly shows the part played by the lawyers in elaborating the basic concept of secularism, democracy and egalitarianism. It was because lawyers inferred the society in reality rather than substantive terms. They also introduced well known issues such as the uncertainty about fundamental rights and directive principles of state policy who were primary. Even after the constitution was adopted lawyers continued to play an important role in national politics and this became a never ending process and lawyers kept on contributing to our society in one or the other way. Lawyers are always in a position or shoe  different from others, to affect the society in terms of great impact by being thought leaders and medium of change. They can make or break the society, bring about huge changes and hold dynamic positions in the ruling body of a state, i.e. the Government. Accordingly, lawyers are able to influence and guide the top policy makers, tycoons, entrepreneurs, leaders and affect the entire world by bringing about change. Lawyers being  HERO of  a common man.

LAWYERS ACTING AS A RAY OF HOPE

A man dressed in black and white attire walking briskly in a corridor enters the courtroom, eyes of the victim turn to him with hope and belief that he will provide him with the justice he waited for, for he is no less than the angel who saved his life. Lawyers are those small pillars in a building that are required the most during the construction of the main pillar to give it support towards the right direction. We did not reach where we are in a day’s work , laws that govern us, the freedom that we have to express , the right to say what desire , choose what we want to work, practice the faith that we believe in. All these rights are conferred upon us by ‘law’ of India and lawyers are the officers who work to make sure that citizens of India are not deprived of their rights.

Being a lawyer is a noble and honourable profession which requires a manner and conduct to be carefully followed. In Bar Council of India rules a lawyer holds a duty to act with nobility and self-respect, to uphold the interest of client by all fair and honourable means and shall not take advantage of the confidence rested in him by his client. A lawyer is bound to conduct himself in a manner befitting the high and respectable legal profession and if he deviates from the high standard which the profession has set for itself and demands of him in professional matters, he will be liable to disciplinary actions.

Engineers can provide you with better software so it may not happen again , Doctors will give you medicine so you may come out of your depression but who will provide you justice,  who stand up for you and bring the culprit down. It is Lawyers who  will take the stand and bring notice to the society what has happened and now what should be done so that the victim will recover from the injury suffered.

It is said that if you want to study a society, you have to study the laws enacted by that society since lawyers are the soldiers guarding laws , they thus play a major role to bring about changes in the masses. It is not only about the facts of the case but how does a lawyer comprehend it and bring about justice. Maintaining the ethics along with ensuring that no innocent is punished personified a lawyer.

Talking about history, Mahatma Gandhi , a lawyer, pioneered the Indian freedom struggle. Many freedom fighters came but the way GandhiJi  revolutionised the Indian society and changed their thinking about violence and British oppression is a perfect example to prove that lawyers impact the society greatly.

Coming back to the current times Maneka Guruswamy the women who brought into light the brutal human cost of section 377(IPC) and played a major role in scrapping section one not just the case but also the change of mind and people’s acceptance.

Thus concluding , Lawyers are the people who bring about a change not only legally but socially too as only a lawyer or painter can turn white to black and vice versa.