A Silhouette of Light: Article 370 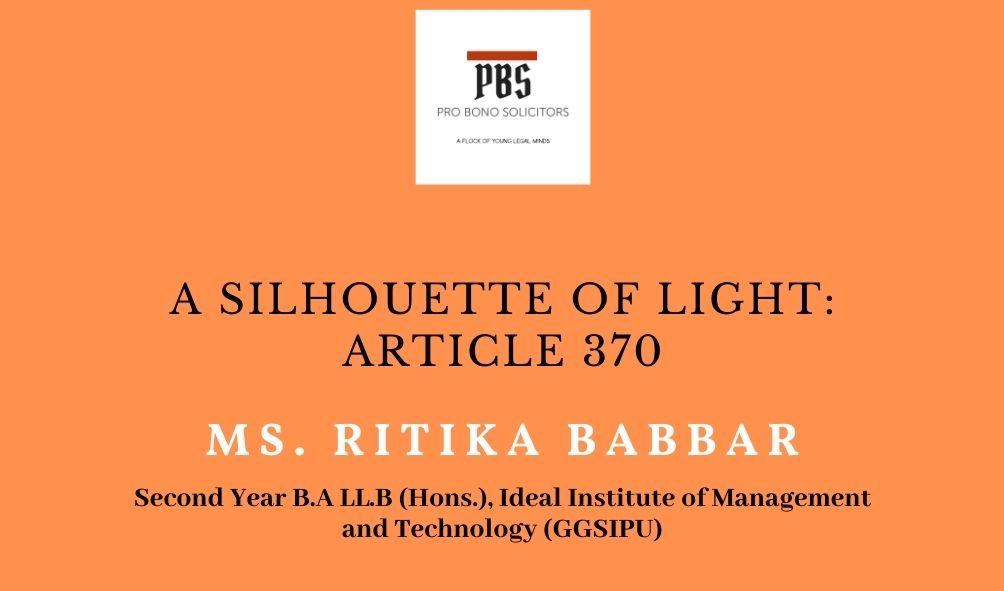 This article is written by Ritika Babbar[1], a Second Year B.A. LL.B (Hons.) Student at Ideal Institute of Management and Technology (GGSIPU), Delhi.

The very utterance of Article 370 originates from a Treaty known as Instrument of Accession, by the virtue of which the state of Jammu & Kashmir acceded to Indian Dominion. It was signed by the then Dogra ruler of the State Maharaja Hari Singh and was accepted by Lord Mountbatten (Governor-General of India) on 26 October 1947 after Pakistan allegedly attacked the State on October 21, 1947.

The Instrument of Accession explicitly mentioned four subjects on which the power was devolved to the Union of India. Those were:

The framers of the Indian Constitution kept these conditions of Accession in mind and after reasoned deliberations and discussions with the Interim Government of the State, which was headed by Sheikh Mohammed Abdullah gave Article 370 a final shape.

In State Bank of India v. Santosh Gupta & Anr[3]., the Supreme Court in para 12 of this judgement held that the first thing noticed about Article 370 is its marginal note i.e. it is a temporary provision with respect to the State of Jammu & Kashmir. However, unlike Article 369, which is also a temporary provision limited in point of time to five years from the commencement of this Constitution, no such limit is to be found for Article 370. Despite its temporary nature, Article 370 (3) it has been made lucid that Article 370 shall cease to be operative only from such date as the President may by public notification declare, which cannot take place without the recommendation from the Constituent Assembly[4].

On August 5 2019 the President of India while exercising his powers conferred by clause (1) sub-clause (d) of Article 370 issued a Constitutional Order 272 and made certain amendments in Article 367. By the virtue of such order, a clause (4) was inserted in Article 367. Clause (4) (c ) stated that ‘Government of the State of J&K includes Governor of State acting on aid and advice of his Council of Ministers’ and clause (d) stated that the ‘Constituent Assembly’ mentioned in proviso to Clause (3) of Article 370 shall read ‘as Legislative Assembly of the State’. The State of Jammu and Kashmir is under President’s Rule since June 2018 and under such rule, the power of the State Legislature is exercisable by or under the authority of Parliament [5].

Therefore as per Constitutional Order 272, the Constituent Assembly is construed to mean the Legislative Assembly, which recommended the President to amend  Article 370, splitting the state into a Union Territory of Ladakh (without a legislature) and Jammu and Kashmir (with a legislature). Such an act probes a serious problem that it construed Governor as the Government of the State, who in turn recommended the replacement of the word Constituent Assembly by Legislative Assembly. But the Governor himself is the Representative of the Central Government, so will such act be deemed to be legal?

Interestingly sub-clause (c) of clause (1) of Article 370 mentions that the provision of Article 1 shall apply in relation to the state and sub-clause (d) states that the President can make ‘other’ provisions of this Constitution applicable to J&K with the concurrence of the State Government. An inference can be deduced that all other provisions of the Constitution can be applied only after concurrence with the state government but the provisions mentioned in sub-clause (c) has to be made applicable to the State without any such pre-requisite.

Therefore it can be concluded that the views of the State Legislature of J&K were not taken into account before splitting J&K into two Union territories and such an act is not in accordance with Article 3 of the Indian Constitution as well. Hence it has been rightly said that what cannot be done directly, can’t be done indirectly too. . With this I request the fellow readers to analyse and deliberate upon the constitutionality of such an amendment in the Indian Constitution.