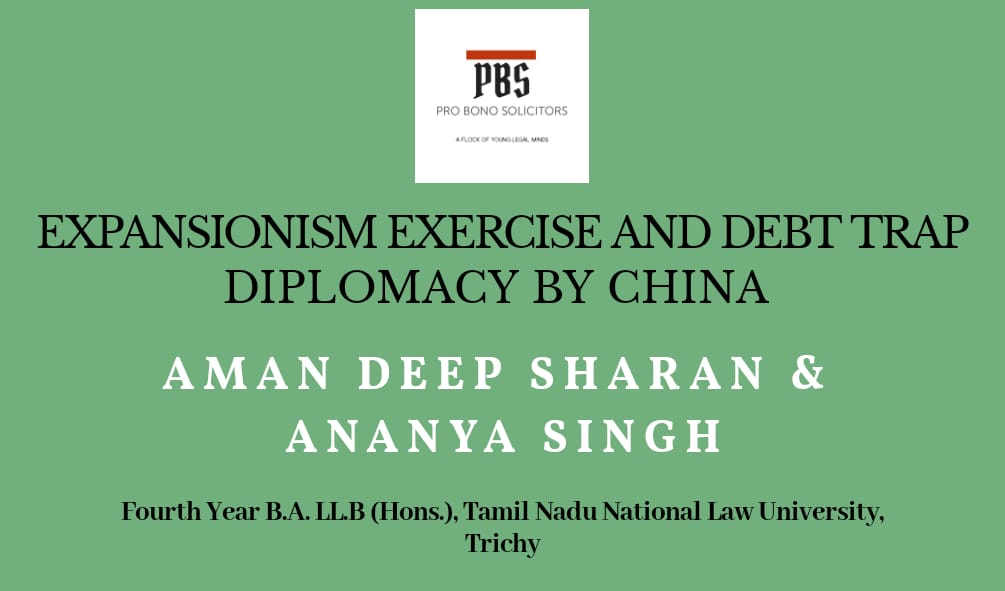 The authors discuss in brief about the expansionism exercise of China by the method of Debt trap diplomacy, where it tries to lure developing nations into pursuing infrastructural projects and low cost loans and the compromises put forth by China in case of debt relief, thereby extending its strategic or military reach. The Article also gives a brief insight as to how BRI by China is considered to be a geopolitical strategy that traps countries in unsustainable debt and allows China undue influence.

There are some benefits or compromises that China requests for debt relief in return. China is investing billions of dollars in the form of concessional loans to developing countries in a bid to achieve rapid political and economic influence worldwide.

Developing nations are also tempted by China’s promise of low-cost loans for transformative infra-projects, requiring substantial investment. These developing nations, which are primarily low- or middle-income countries, are unable to keep up with the repayments, and Beijing then gets a chance to demand concessions or advantages in exchange for debt relief[1].

There are some benefits or compromises that China requests for debt relief in return. For example, Sri Lanka had been forced to hand over control of the Hambantota port project to China for 99 years, after finding itself under huge debt owed to Beijing. This allowed China to control a key port on its regional rival India’s doorstep, as well as a strategic foothold along a key commercial and military waterway. Similarly, China built its first military base in Djibouti in exchange for relief. Although Angola replaces China’s multi-billion-dollar debt with crude oil, it causes significant economic problems.

China’s overseas development policy has been called debt-trap diplomacy, because once indebted economies fail to serve their loans, they are said to be under pressure to support China’s geostrategic interests. For example, some commentators maintain that China supports authoritarian regimes by means of high-interest loans in a neo-colonialist way, intending to coerce these countries once they default to align with China on key strategic and military issues. China has been accused of allowing secret agreements and non-competitive pricing on projects where contracts are to be awarded to Chinese state-owned or associated firms paying far higher rates than would be paid on the open market, and competition must be terminated.

Now China will occupy the highly lucrative port of Mombasa in Kenya. Beijing had lent enormous sums to the construction of Kenya’s railway network which the African nation is unable to repay. Not only this, the Nairobi inland container depot is under threat of a Chinese takeover as well.

We must remember that the modus operandi is the same as was in Sri Lanka, when Colombo had to hand over the port of Hambantota to China on a 99-year lease due to non-payment of Chinese borrowings.

China had lent 550 billion Kenyan shillings to construct the Standard Gauge Railway project in Kenya. It is not receiving enough revenue and in the first year alone it lost 10 billion Kenyan shillings. To order to make up for the shortfall, China must buy not only the project but also the Mombasa port. Kenya’s auditor general claims a formal arrangement has been reached with China’s Exim Bank, and that arbitration of this arrangement will only take place in China.

The scariest clause of this agreement is that the Kenyan government has guaranteed a minimum occupation to China in the railway sector. It now leads to a situation where Kenya loses control of its valuable public properties. Indeed, if we look at it closely, China’s whole Belt and Road Initiative (BRI) is in fact proving to be part of its debt-trap diplomacy.

In 2013, Chinese President Xi Jinping initiated the most ambitious One Belt One Road (OBOR) initiative in China involving the development of two projects, namely the Silk Road Economic Belt (SREB) and the Maritime Silk Road (MSR) of the 21st Century. OBOR later came to be known as Belt and Road Initiative (BRI). It is a global development strategy adopted by the Chinese government involving infrastructure development and investments in 152 countries and international organizations in Asia, Europe, Africa, and the Middle East. The project is often described as a 21st century silk road, made up of a “belt” of overland corridors and a maritime “road” of shipping lanes[2]. Significantly, BRI was called a major infrastructure project that would make the transportation of goods between various countries simpler and cheaper by constructing highways, railways and sea routes, thus promoting international trade[3]. China is trying to get the world to accept the point that the BRI project would prove useful in improving international trade, economic ties and connectivity for developing nations. Although describing BRI ‘s advantages, attempts are being made to conceal its political, cultural, and geopolitical ramifications and challenges in public discourse.

The success of any scheme depends on its financing. This applies even more to infrastructure projects. When the Belt and Road Project was initiated, all funding came from the Chinese government, the Asian Infrastructure Investment Bank led by China, and other Beijing institutions. Since investment in BRI and other related infrastructure came from China, be it the Chinese government itself or the Chinese government’s financial institutions, many countries have been trapped in a debt trap because of different reasons. In most of these cases funding was at an exorbitant rate of interest or it was made for non-viable projects or both. Sri Lanka’s Hambantota port became a startling example in this regard.

Looking at that, many countries have started to shy away from China’s plans for infrastructure. Likewise, another port in Djibouti, a country that has become the US ‘s largest military base in Africa, is now on the verge of being taken over by a Chinese corporation because of heavy debt. Opposition to the BRI is growing in many countries because of the rising debt burden. In the last two years, not only opposition parties in BRI partner countries, social organisations too are strongly opposing the project.

The China-Pakistan Economic Corridor (CPEC) is said to be the first project of BRI. The history of Pakistan can be used as guidance for the future. Pakistan’s then-Prime Minister Nawaz Sharif had said years ago that CPEC would prove to be a “game changer” for Pakistan and South Asia. But the way Pakistan has sunk into debt after four years shows that is not the case. Further, the growth there has come down from 5.8% in 2017-18 to 3.4% in 2018-19 and a projected 2.7% now.[4] With the worsening economic condition of Pakistan, nobody in that nation is now calling CPEC a ‘game changer’.

It must be noted that there are still several apprehensions from the World Bank regarding the BRI initiative. This was addressed in depth in many studies from the World Bank, but there has been a lack of concerted effort by international financial institutions to take over BRI projects so far. Time will tell if China will emerge from its ‘monopolistic’ policy and make extensive efforts to push BRI through global fora. Unless China mend its ways, it will create barriers to its own plans. Yet whatever the case may be, today the truth is that about 10 countries have been stuck through BRI in China’s debt-trap diplomacy.